Apprentice of the Month (March) 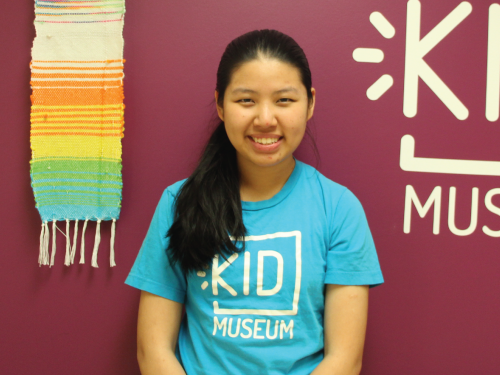 Introducing our Apprentice of the Month: Sherry!

“Sherry Liang is the definition of dependable. Any time we ask for extra apprentices, she always makes herself available. She serves as an excellent example for new apprentices and sits on our apprentice panel during new apprentice training. We are grateful to have excellent young people like Sherry.” – Kendra Woodfolk, KID Museum Apprentice Program Coordinator

Reason for Becoming an Apprentice: Sherry loves STEM, making, and working with kids, and thinks of KID Museum as her “second home.” She especially loves KID’s emphasis on the imagination: “We’re living with the same problems we’ve had for decades — whether they’re environmental, social or technological — because there is a lack of creativity in our solutions. Now, more than ever, creativity and innovation are the future. Both are only possible through nurturing childhood imagination, and as an Apprentice I get to do exactly that!”

Favorite Part of Being an Apprentice: Being able to impart her knowledge and understanding to visitors.

Advice for Apprentices: “Just go for it! Don’t be afraid of failure — because it is a part of the making process. Without failure, success would not exist. At KID, it’s not about the final product; it’s about the skill we learn while making it.”

Future Plans: Sherry plans to study either computer or electrical engineering in college. She’s not sure of her career path but says she looks forward to applying all she has learned at KID.