Vanya Gorbachev is a 14-year-old KID Museum regular. He has been with KID Museum for 3 years, helping to run fairs even before the museum had its own space. Like many teenagers, Vanya is involved in a lot of activities outside of school, including jazz band and rock climbing. Unlike many teenagers, Vanya is a 3D-printing expert, having built his own plywood 3D-printer from a kit given to him by his father, as well as an all-around making enthusiast.
Through his studies, Vanya has developed an interest in astronomy and physics. Having just finished one physics course, he hopes to continue pursuing his passion when he begins high school in the fall. He was recently given the opportunity to tour SpaceX, an American aerospace manufacturing company that produces spacecraft. Vanya excitedly talked about the capsules he was able to see and how he hopes to someday work there.
You can find Vanya in the 3D-printing room at KID Museum, helping others learn the basics so they can create whatever designs they can come up with. Although the 3D-printer looks daunting and confusing, Vanya explains it in a way that makes it accessible to anyone. During a recent visit to KID Museum, many young kids wandered into the 3D-printing room, and Vanya helped them to understand the process and come up with cool ideas. Vanya can also be found solving problems in many other areas of museum. He was asked to help fix an amplifier that a kid built that was not working, and was able to identify that it was due to some short circuits. Vanya credits his experiences at KID Museum with helping to develop his interest in the physical sciences. 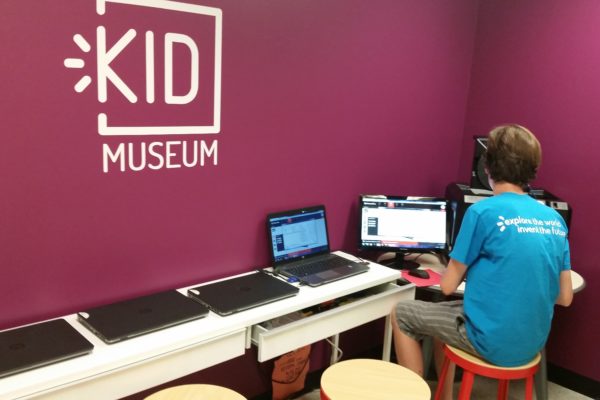