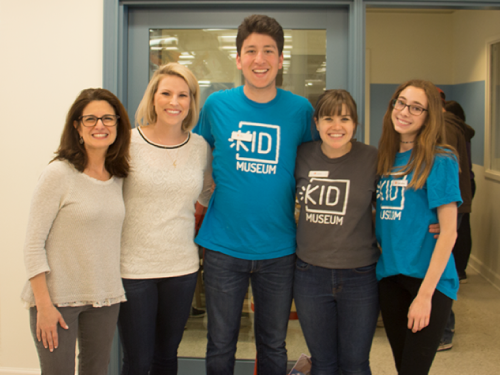 As the school year comes to a close, we see the doors open for a number of our KID Museum Apprentices who are off to new adventures in STEM…

Congrats to Benjamin Owen (Bo) Rider for recently earning a scholarship to conduct STEM research this summer at the Technion-Israel Institute of Technology in Haifa, Israel. “I am very excited by the idea of spending a month in Israel with old and new friends, in an academic setting, working on an engaging project,” said Bo.

Upon receiving the Dr. Istvan Madaras SciTech Scholarship (supported by the American Technion Society), Bo will spend the summer at SciTech—an international science and technology camp for high school students that combines research with cultural and social activities. He’ll work side-by-side with university scientists on projects ranging from aerospace engineering to cancer treatments.

Congrats to Daniela Moreira who recently became a Questbridge College Prep Scholar last month. Questbridge gives outstanding, low-income high school juniors an early advantage to gain admission and full scholarships to top-tier colleges. “I obviously put [KID Museum] all over my application,” Daniela remarked. “One of my short essays for the Quest for Excellence in STEM award was about KID Museum.” We’re rooting for you, Daniela!

And congratulations to all of our graduating Seniors, including:

– Joyce Kong (Poolesville High School – Apprentice since 2016), who was accepted to a six year Doctor of Pharmacy program at Rutgers University.

– Kanali Sandrine Bamba (Washington Christian Academy – Apprentice since 2015), who was accepted to the School of Architecture at Syracuse University.

– Elizabeth Vicarte (Barbara Ingram School for the Arts – Apprentice since 2016), who was accepted to the School of Engineering at Cornell University.

You can learn more about KID Museum’s Apprentice program for high schoolers here.