From KID Apprentice to Local Change-Maker 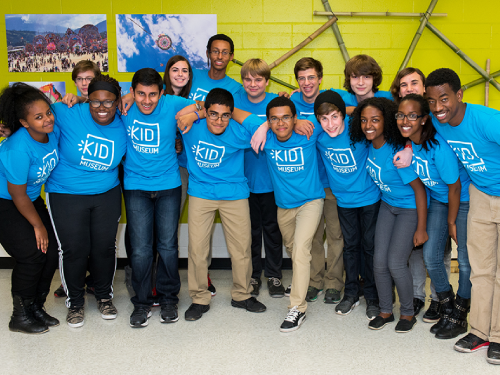 Three years ago, some friends came to me elated that they had just become Apprentices at the brand new KID Museum. They would get to work with new technology, participate in innovative projects, facilitate classes for kids, and on top of all of that, earn SSL hours for their work. The idea of learning how to use a 3D printer was particularly intriguing for me — enough so that I soon applied to become an Apprentice myself.

During my first few months as an Apprentice, I helped with Open Explore activities and a variety of workshops, and started learning the ins and outs of 3D printing. It was during a 3D design and printing summer camp where I was really able to master the technology.

Once I understood the capabilities of 3D printing, I started working on my own project — a 3D-designed electric skateboard. The idea was to secure a motor, battery, and drive system to a traditional skateboard, and then control the motor with a remote controlled car remote. I began designing and 3D printing parts at KID Museum, and before I knew it, I had a working prototype ready to test ride.

I rode the electric skateboard through my neighborhood and it was AMAZING. I would simply pull the trigger on the remote and glide down the road without the need to push. It was such a fun feeling riding that skateboard, made even better knowing that I had created it myself.

When the prices of 3D printers came down, I decided to buy my own and see what I could create at home. Fidget spinners were starting to become popular, so I designed and 3D printed my own unique version. I brought them to school and my friends and classmates were amazed and interested in buying mine — my 3D printing business had begun!

I would go on to sell hundreds of my spinners, mostly online. It was a rush to see new orders come in each day on EBay and Etsy. I learned so much from this business, from shipping, to dealing with customers, to marketing.

Last year, I had the idea of starting a makerspace at my high school so my friends and classmates would have a place like KID Museum where they could explore and innovate. As a student member of the Educational Foundation at Churchill High School, I advocated for the Foundation to fund a 3D printer and they agreed.

After months of evaluating options and getting approvals from our administration, the printer is finally up and running! We now plan to host workshops to teach students how to use the technology. And to think, if it weren’t for KID Museum, I may have never been exposed to any of this.

—
Learn more about becoming a KID Museum Apprentice here. Applications for the summer semester are due April 20.