Toy 2.0 Challenge is well under-way! The semi-finalists are in the prototyping stages of their toy design, working hard with mentors to develop their prototypes for the next round of judging, which will take place at Maker Faire Silver Spring in September. Oliver Foley, a 12-year-old from Hyattsville, Maryland is one of the 9 semi-finalists currently working on his prototype. His toy is called the Para-Pigeon – it is a “drone bird” that will someday be capable of responding to a homing device, opening and closing its beak, responding to a controller, and navigating a maze to play racing games against other Para-Pigeons. Oliver has been working on his prototype over the summer, meeting with Joe Meno, an expert in industrial and product design, to bring his idea to life!

There are always challenges to face when making something. Oliver and Joe faced some of those challenges together this past weekend, such as deciding what material to build the Para-Pigeon out of and how many layers of material Oliver can use while still keeping the toy lightweight and maneuverable. The other semi-finalists will also be meeting with Joe, who challenges the kids to draw, expand their ideas, and dream big.

The kids will be hard at work this summer bringing their designs to life in time to present them on September 20. At Maker Faire, three finalists will be named and will continue on to the next round. Innovation First International, the creator of Hexbug toys, will choose the winning design, which could someday be made into an actual toy to be sold at toy stores everywhere!  Come by Maker Faire Silver Spring to see their awesome final prototypes!  Read more about Oliver and a few of the other semi-finalists and their prototypes in KidsPost! 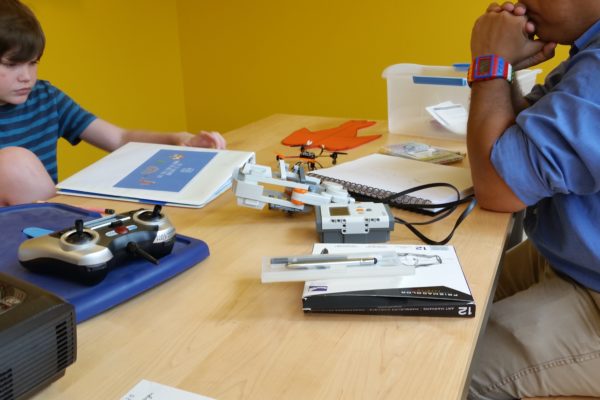