By KID MuseumAugust 2, 2018No Comments 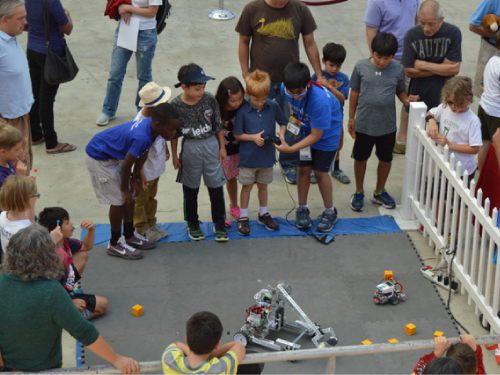 It’s not the opening to a joke; it’s what you’ll find at this year’s KIDfest. Three local robotics teams who participate in FIRST Robotics, a national robotics competition for grades 7-12, will be on hand to showcase their award-winning creations—which are programmed to play games by remote control and, incidentally, weigh as much as 150 pounds!

You’ll meet Wizards.exe, FTC Team #9794, based in Rockville, whose students attend Richard Montgomery, Wootten, and Montgomery Blair High Schools, and Julius West, Robert Frost, and Takoma Park Middle Schools. Wizards.exe is capping off an exciting year that took them to the FIRST World Championship in Detroit, where they won the INSPIRE award for excellence in robotic design, engineering and community outreach, and then to the FIRST Global Competition in Mexico City this summer. Parvathy Shivaramakrishnan, mother of team member Maanav, notes that the Wizards.exe are “big fans” of KID Museum, where they offer robotics workshops and mentor younger kids in FIRST Lego League.

Blair Robot Project, FRC Team #449, represents Blair High School in Silver Spring. Senior Shwetha Kunnam, who joined when she was a freshman, says her team enjoys participating in KIDfest every year. “Our team members love interacting with kids at such a big event. We’re looking to get other kids interested in what we do and inspire them to join robotics teams. It’s a wonderful experience that we want to share with everyone.”

Finally, Whitman Robotics, FRC Team #1389, from Walt Whitman High School in Bethesda, will make their their first appearance at KIDfest. Team president Farish Perlman, mother of team member Cameron, says that robotics teaches kids that “anything you dream up is possible to accomplish,” and that robotics is for everyone—not just techies. “We need the people who can create the presentation and do the public speaking, as well as those who know how to wire and do the math. Everyone can contribute.”

Come out to KIDfest on Sunday, September 23 in downtown Silver Spring, and meet these inspiring students. The future of robotics starts here!

Learn more about KIDfest at kidfest.org.