By KID MuseumJanuary 28, 2015No Comments

The e-textile workshop at KID museum took place on January 11th, 2015. I attended the 11:00 am session. Two kids attended and learned how to make a simple circuit. The kids made hand bracelets, with electric thread, snaps, and an LED light. The goal was to hook up electrical thread to the snap so that when the snaps touched each other the LED light would power on. The adult teaching this class was BB*.

I interviewed both kids. Michal said that the most interesting part of this workshop was that “the thread was working as a wire”. She found out about this workshop from her “papa”. She was interested in this workshop because she has “snap circuits that made me interested in electronics and I like to work with fabrics”. According to her, the hardest part of the workshop was “sewing” the thread. The easiest part was checking which was the “positive side [of the battery] and which was the negative [side of the battery]”. Rohan, who was another attendee of this fabulous and very educational workshop, said that he joined because he likes putting what he made on “everything” and “testing” it out. The most interesting part was “making the light turn on because of the battery and the circuit”. The hardest part was “sewing” and the easiest part was “putting the battery in” according to Rohan. 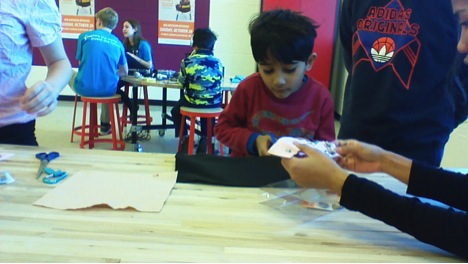 Rohan is working hard on his electric wrist band that will be wearable and light up.